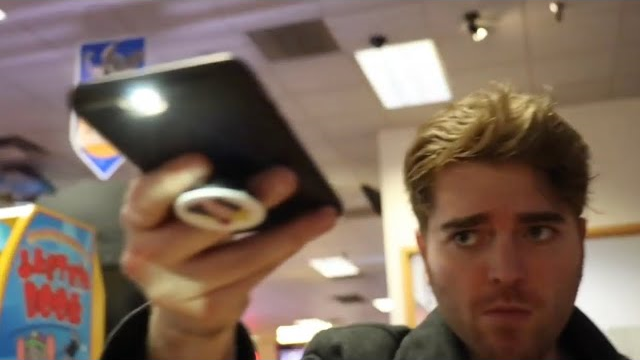 Is the animatronic mouse who greets customers at Chuck E. Cheese’s harboring a dark secret? Shane Dawson, a massively popular 30-year-old Internet personality, thinks he might be. The YouTuber added new fuel to a bizarre, decade-old conspiracy theory on Monday, when he posted a video promising an in-depth investigation into misshapen pizzas.

“So I noticed this when I was 8 years old or something,” he said, “I was like, wait a minute, how come all the pieces are different?” A Google search turned up two Yahoo! Answers threads from 10 years ago, in which concerned customers postulated that staff at the family-friendly chain were recycling pizza slices that get left behind on the table after customers finish eating.

In his video, Dawson strongly suggested that Chuck E. Cheese’s employees could be reheating those old, leftover slices and using them to form new pizzas, despite the fact that no evidence of this has emerged over the past decade. “Just a theory,” he said, later asking out loud, “Am I going to get sued?” CEC Entertainment, Inc., the parent company for Chuck E.

Cheese’s, hasn’t indicated yet whether they plan to take legal action against the YouTube star. But they did feel compelled to respond on Tuesday to the video, which had more than 14 million views as of early Wednesday morning. “The claims made in this video about Chuck E.

These claims are unequivocally false. We prep the dough daily for our made to order pizzas, which means they’re not always perfectly round, but they are still great tasting. — Chuck E. Cheese’s (@ChuckECheeses) February 12, 2019 In his video, Dawson attempted to investigate for himself by going to a Chuck E.

The theory had some obvious logical flaws — for instance, who abandons leftover pizza? But many of Dawson’s fans evidently embraced it, as the comments on his YouTube page attest. “I’m so lucky I’ve never been to a Chuck E. Cheese in my life﻿,” one said,

Others pledged to never return to the pizzeria-and-arcade franchise again. As the unfounded theory spread around social media on Tuesday, setting off heated debates, past and present employees began offering their own rebuttals. In a video titled “Ex-Chuck E. Cheese Employee Responds To Shane Dawson’s Conspiracy,” a YouTuber going by the name Payden offered a perfectly logical explanation : The chain wants its pizzas to have the same number of slices each time, which can present a challenge for rushed kitchen workers.

Sometimes, after pulling a pizza out of the oven, he would start cutting it up only to realize that he had 10 slices instead of the 12 that he needed. “You’ll just find a really big piece of pizza and you’ll only cut that one in half,” he said. “Because of that, it’ll start to make a line that doesn’t end up anywhere and stuff like that.

It’ll make all of these lines look all funky.” He added, “It’s people in the kitchen just not giving a crap.” I work at chuck e cheese and I can tell you we literally do not recycle our pizza slices.like that’s whack. Ive seen the kitchen guys make fresh pizza all the time a new order comes in and see the gameroom guys throwing out left over pizza on table 😂 — m (@marianadawoodx) February 12, 2019 I worked at Chuck E.

Cheese and I have to say, that the conspiracy theory from @shanedawson is so fake. The pizza slices move when they move it from where they cut it to the pizza platter. Especially when they place a large pizza into a Xlarge pizza platter. pic.twitter.com/n4uHDmRnbz — nicole 🌹 (@NicoleRandomly) February 12, 2019 Dawson joined YouTube in 2005 and became one of its biggest stars several years later, when he began posting his comedy sketches on the site.

As The Verge noted, Dawson has posted disclaimers in the past explaining that his conspiracy-focused videos are intended for entertainment purposes only, not as statements of fact. Monday’s video, titled “Investigating Conspiracies with Shane Dawson,” is categorized on the site as a comedy, even though it also features the decidedly unfunny story of a woman who claims to have narrowly escaped human trafficking in Serbia.

Last month, the company announced that it was reworking the algorithm that suggests recommended videos, so that users will no longer be led down a rabbit hole of hoaxes and misinformation. But as The Washington Post’s Elizabeth Dwoskin reported, the company has traditionally prioritized freedom of speech and refrained from placing an outright ban on false stories.
Pogledajte cijeli odgovor

Despite the theories, it’s most likely that Chuck E. Cheese doesn’t reuse its uneaten pizza. The Chuck E. Cheese franchise evokes thoughts of entertainment through arcade games or songs performed by an animatronic mouse. In the restaurant, however, Chuck E. Cheese is known for its pizza.
Pogledajte cijeli odgovor

Is it free to get into Chuck E Cheese?

There is no admittance charge to enter Chuck E. Cheese. Plan A Birthday Party Sometimes, there are better deals to be had for a birthday party than for an afternoon of fun. Why not get a group together for a birthday party? With a basic package, every kid will get a few slices of pizza, a drink, and some tokens.
Pogledajte cijeli odgovor

Do they recycle the pizza at Chuck E’ cheeses?

Multiple Yahoo Answers threads ask the question ‘Does Chuck E. Cheese recycle pizzas?’ The answer is always no, because it would be a health code violation, and be terrible press if it ever came
Pogledajte cijeli odgovor